Duke University trustee and Apple executive Eddy Cue (’86) and his wife Paula (’86) have made a $10 million gift to advance diverse faculty hiring and retention at Duke.

At Apple, the Cues learned that for technology to meet the world’s needs, everyone must be able to see themselves in it.

Eddy Cue, Apple’s senior vice president of services and a new Duke trustee, and Paula Cue, a former Apple programmer, say everyone has unique skills. They’ve seen the benefits that employees can add to the technology industry when their inclusive experiences, perspectives and skills are represented and valued.

Now, through a new $10 million gift to Duke Science and Technology, the Cues want to continue developing ways to diversify technology by providing more opportunities for Duke students and faculty. The gift will help the university recruit and educate the next generation of tech leaders and innovators and further advance Duke’s focus on computing—AI, cybersecurity, privacy, autonomous systems, the Internet of things and more.

“We are so grateful to receive this transformational gift from Eddy and Paula Cue,” said Duke President Vincent E. Price. “Expanding opportunities for underrepresented populations in the STEM fields is a vitally important priority as we seek to foster both a more diverse academy and inclusive future for technology. Paula and Eddy’s generosity—and the Cue Faculty Fellows program—will ensure that Duke leads the way.” 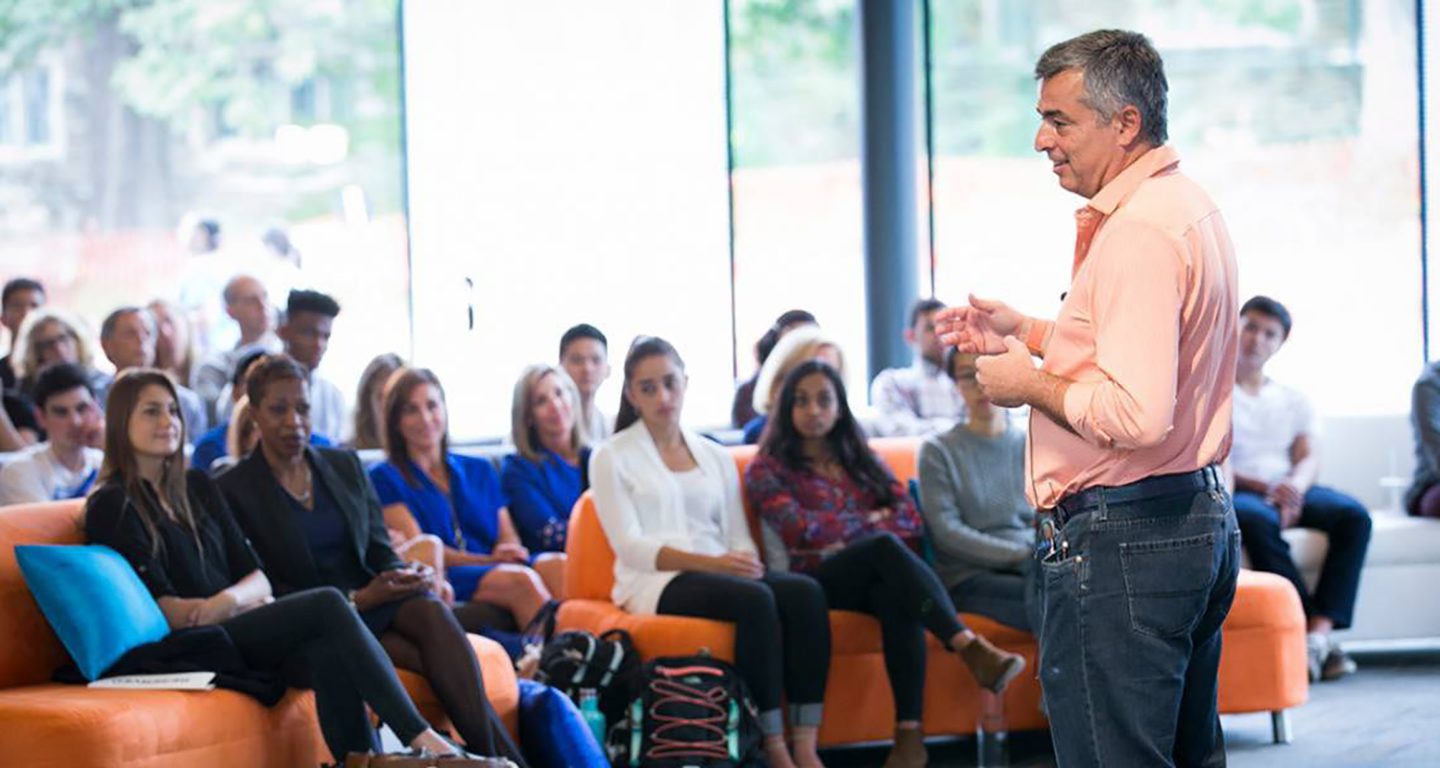 In 2017, Duke alumnus Eddy Cue met with DTech scholars, a program meant to inspire women undergraduates into careers in computer science and electrical & computer engineering. Paula Cue is a long-time mentor in the program.

The lack of diversity in STEM—science, technology, engineering and math—has long been a struggle for both institutions of higher education and the modern workforce. A recent report released by the Pew Research Center notes that the share of women and Black Americans employed in STEM has not significantly increased since 2016.

The gift will enable Duke to not only recruit extraordinary faculty, but to retain them, says Valerie Ashby, dean of Trinity College of Arts & Sciences.

“I have tremendous appreciation for all the ways the Cues have engaged with Trinity and with Duke,” Ashby says. “This significant investment in our academic core will be meaningful for years to come.”

The Cue Faculty Fellows will serve as a model for creating an environment in which underrepresented Duke students see mentors and models in faculty members teaching their courses. And new faculty members will be recruited to Duke to grow as a cohort over time, helping to improve retention as Duke expands its computer science and computer engineering excellence through diversity.

A focus on increasing diverse faculty hires in science and technology was of particular interest to the Cues, who bring decades of experience in Silicon Valley and who champion and innovate everywhere they go.

At Duke, Eddy Cue became the first Cuban-American on the Board of Trustees and was instrumental in helping to create the Duke iPod Project in 2004, which was one of the first efforts of its kind to connect digital technology with learning and led to the formation of the Duke Digital Initiative.

He has been a longtime speaker at Duke, contributing to education and sports-related programs.  Paula Cue has long championed women in tech, serving as a long-time mentor for Duke Technology Scholars (DTech)—a program focused on closing the gender gap in tech and raising new technology leaders among Duke undergraduates.

“Duke provided me with many of the experiences and skills that have been so valuable throughout my career at Apple,” said Eddy Cue. “I’m honored to be working with Duke to support the future of the tech industry — these will be the next people who change the world.”

“Every workplace benefits from more perspectives,” said Paula Cue. “I am so proud to support Duke’s efforts to narrow the gender and racial gap by including more diverse representation at the undergraduate and faculty levels to help elevate tomorrow’s leaders.”

In addition to the Cue Faculty Fellows, $2 million from the Cue’s $10 million gift will be equally allocated to the Duke Discovery Fund, a flexible funding option for science and technology efforts at Duke, and the Center for Computational Thinking (CCT), which prepares students for 21st century work by teaching computational skills.

In all, the Cues hope their gift for Duke students and faculty helps put the university on a new trajectory toward diversity, equity and inclusion in tech and will bolster a Duke the Cues have been and continue to be shaped by.

The intention behind the gift doesn’t come as a surprise to Duke Men’s Basketball Head Coach Mike Krzyzewski, who has known the Cues for years.

“We are very close friends and consider them family,” Krzyzewski said. “They are unbelievable representatives of Duke and we are all very fortunate to have them on our team. They have a clear vision of what it takes to sustain the continuity of excellence that this great university offers so many students, faculty and staff.”

The gift couldn’t have come at a better time, said Dave Kennedy, vice president of Duke Alumni Engagement and Development.

“We are extremely grateful to the Cues for partnering so generously with Duke to help shape the next generation of tech leaders and innovators,” Kennedy said.